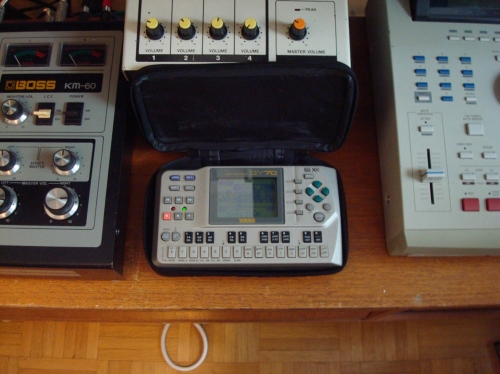 I even got the original Yamaha carrying pouch included for the 100 euros.

I recently acquired a Yamaha QY-70 sequencer for myself. It’s the third time I have owned this little beast and now I’m not letting it go so easy. The first time I had this wonderful machine was around 2003-2004 when I lived in a small mostly swedish speaking city of Karjaa for a year. At that point my synth-collection comprised mostly of Yamaha’s Groove Factory -family of products. I had the wonderful AN-200 analog modelling synth/drummachine and it’s FM-synth sibling DX-200. I also had Yamaha’s top of the line groovebox the RM1X and a shitload of small Casio-keyboards and different toys that made noise. Still my absolute favourite piece of equipment at the time was this VHS-cassette sized portable sequencer with 16 tracks, easy programming and a huge collection of different voices.

I took the QY-70 everywhere with me. If I went to a bar or took a trip on a train, I had it in my bag and whenever there was a dead moment, I whipped it out and started fiddling with it’s minuscule controls. It runs on six AA batteries and has a reasonable amount of memory in it to write complete arrangements on the go. I still have a couple of minidiscs from that Karjaa year filled to the brim with short musical ideas and songs done on the QY-70. Usually I came up with melodical ideas when taking walks in nature or just when I was buying toilet paper from a shop. The sequencer was small enough to carry everywhere and write down those ideas as soon as they were born. I didn’t have to keep humming my melodies until I got home in front of my bigger sequencer.

At that point in my life I was very much into doing electronic music in the more traditional sense. I wanted to be Finland’s own DJ Shadow and was looking into buying a couple of turntables a sampler and a dj-mixer. Then came the unfortunate day that somebody was getting rid of their Numark TT-200 direct drive turntable and I had no money. I made a list of my equipment and the guy selling the turntable settled for a trade for my beloved QY-70. I thought about it long and hard and came to the conclusion that I needed the turntable so bad that I was ready to give my pocket size sequencer away. After all I was still left with my RM1X which was not exactly portable, but offered a bit more sophisticated controls and better sounds. I sent my QY to Tampere and in return got a spanking new turntable. I never looked back.

Until a few years later when I saw an old friend selling one. I bought it immediately for the sake of old times, but having used the RM1X extensively for sequencing for a couple of years, the QY seemed somehow cumbersome. Unlike in RM1X the small LCD on the machine displayed every bar in two rows and the controls were largely menu-driven. It didn’t feel as intuitive as the larger equipment with bigger displays. I just didn’t feel the need for owning one anymore. Songwriting seemed so much simpler on my current setup at the time. So I got rid of the QY for the second time.  I never looked back.

Until a few months back. Somebody sold 2 separate units of QY-70 for a 100 euros each. I dashed to my email and reserved the second one for myself. I no longer own the RM1X or any of the other synths I had in my Karjaa year. I’ve sold all of the analog-modelling instruments and grooveboxes and replaced them with genuine analog gear. I had also acquired an Akai MPC 2000XL for all my sequencing needs, which I still haven’t quite figured out. I have grown up with the Yamaha-style of step sequencing where I can see every note as a symbol on a timeline. If I want quarter notes on my Yamaha sequencer, I just have to place notes on every 8th place and that’s it. Simple and effective. After that the MPC-style of sequencing seemed a little bit too arbitrary and “in the air” for my personal tastes.

In the last couple of months that I’ve had my QY-70 back, I’ve written more riffs, melodies, drum parts and basslines than ever since my Karjaa times. I just love the way the QY-70 works and since this is the third time I own the machine I’m finally starting to get to grips with all the different aspects of the little machine. Now I am able to use the pattern-sequencing side of it with ease and I’ve also come to terms with the auto-accompaniment-machine, which on first contact I thought was dreadful. The QY-70 originally came out in the late nineties and it has taken me three machines and almost ten years to fully exploit all of it’s possibilities. It’s just one more example of sticking to your guns. When something isn’t broken do not try to fix it. Teach yourself a good method of doing things and stick to it. You’ll get a lot more results than with trying every new software/hardware a little.

Our drummer bought a QY-70 too from eBay Japan and now I’m trying to persuade for our second synth player to get one too. (You can buy them for as little as 80 euros if you’re lucky.) I’m dreaming of everybody in the band writing their own synth/bass/drum-parts at home in a certain key and then meeting in a park and syncing the three machines together with a couple of midi cables and blasting the newborn songs through a ghettoblaster. That would be a revolutionary way of writing new songs and trying new things. With the built-in playfx, transpose-abilities and midi in we could do semi improvised park sessions in the sunshine.

I’ve come to realize that the QY-70 for me is like a typewriter for writing music. The melodies and beats just flow from my cortex (or whatever) to the screen of my Yamaha. It is without a doubt the absolutely best way to record musical ideas for me. If I get a melody in my head I just turn the QY on and within five minutes I have it written down for later use. (And say what you want, but the built-in sounds aren’t that shabby either. They’re actually quite nice and there’s something for every style of music you can imagine.) That ease of use combined with it’s portability just can’t be beat. Not for me at least. Maybe someday there’ll be an app for iPad that does the same thing, but for now, I’m sticking with my trusty portable Yamaha. The only complaint that I can come up with is that the screen isn’t backlit, but that would consume the six batteries in a flash, so maybe that’s not a too bad thing after all. 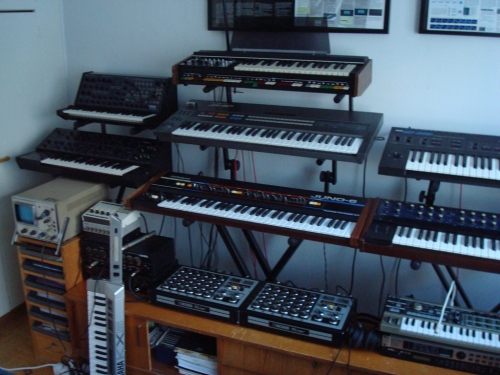 Last night when I was just about to ready to fall asleep, I had an idea.

The next morning you wake up with a nagging empty feeling, that you’ve maybe lost something, but can’t quite put your finger on what’s missing. This time was different. The idea was so profound and exciting, that I couldn’t afford to forget it. I didn’t write it down either, but anyhow, when I got up in the morning I still had it in my mind clear as yesterday.

What if I could tickle and trigger the Arpeggio Trig -inputs on my Korg Mono/Poly and Polysix with just programmed loud audio signals from my midi sequencer? It’s not exactly a groundbreaking idea, it’s been done before, but to me it was something exciting, somethingI had never tried before. My idea was to have just a pulsing rhyhtm fed into the trig in jack that would sync the arpeggios to my midi gear. I knew beforehand, that some people had used their samplers with a certain non musical sample to trigger external equipment, but I had something else in mind. My Akai MPC 2000XL is the tool that I mostly like to use for sequencing, but as I only have the regular stereo-outputs in it and no extra outs, I couldn’t use those because that would’ve ment the loss of drumtrack.

Next to my MPC there’s a Kawai K1 RII rack unit, that I rarely use for anything. It has 4 outputs in addition to it’s regular stereo-pair. So I decided to use this 90’s Kawai racksynth as a midi to trig -converter. I loaded a drum program and a midi sequence into my MPC, programmed a repeating note on a free midi channel for the duration of the whole 4 beats,  fired up the Kawai, put a cable from output 2 into Mono/Poly’s Trig In and then Arpeggio Trig In. No effect, either way. Or at least not the desirable effect. The Mono/Poly started warbling when I flicked the trig polarity switch, but no rhythmic patterns were to be heard anywhere. I was dissapointed and decided that the problem was with the type of sound I had chosen. I went through all the presets and ended up using a basic loud synth sound with fast attack. I programmed the sound to have no sustain or release and step by step went through the sequence shortening the decay of every note to 5 and turning up the velocity to 127. Still no luck.

I tried many things, but eventually gave up. Just when I was ready to turn off the power and forget the whole thing I had the bright idea of routing the signal through my Korg MS-20’s External Signal Processor. With that I finally had success. I adjusted the volume and threshold knobs to get an even pulse, patched the ESP’s trig out into Mono/Poly’s Arpeggio Trig In and from Mono/Poly’s trig out into Polysix’s Arpeggio Trig in. Finally I patched the ESP’s Envelope Out to MS-20’s own trig in and there I had it. I had my midi-sequencer controlling not only numerous midi equipment, but also three non-midi synths and everything was perfectly in sync. I didn’t need control voltage as all I wanted to do was to sync the two arpeggios to my drums and other sequences going on.

I’ve been pining for a Roland TR-707 lately, but with this newfound innovation, I’m in no hurry. It’s not perfect, it’s not beautiful, it’s not meant to be, but it works. That’s all that matters in the end. I finally have my CV/Gate synths happily in sync with my midi synths and sampled drums. As I was testing this configuration I already made one krautish new track. Perfect.